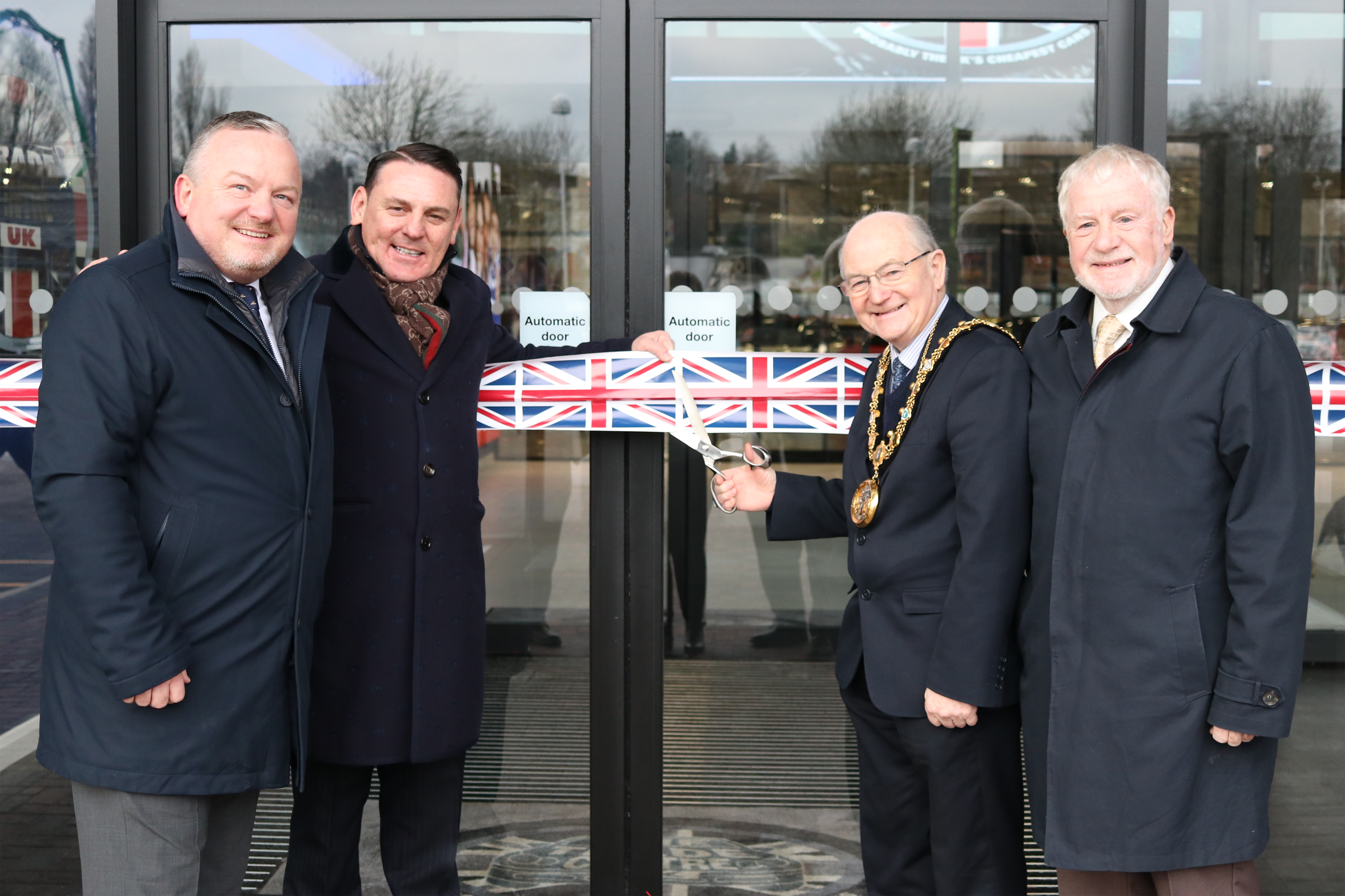 The Trade Centre UK’s newest outlet, located at Sandbrook Park, Rochdale, has been officially opened by The Mayor of Rochdale Billy Sheerin.

The ribbon was cut and the store officially opened by Mayor Sheerin at 12 o’clock on Tuesday 3rd December 2019, to a round of applause from staff, onlookers and eager car shoppers.

The showroom stocks 1,000 used cars, all ready to drive away in an hour with the assurance of them probably being the UK’s cheapest. Customers are able to finance a car with as little as £99 or their old car as deposit with payments as low as £20 per week.

The Trade Centre UK has also acquired a nearby ex-Honda dealership to facilitate vehicle logistics and also a state-of-the-art customer care suite.

"The welcome we have had in the Borough is amazing, no matter who you speak to, whether it be the Mayor, Council leaders or the dozens of customers buying their new car on our opening day everyone has been so welcoming and friendly. We founded this business in 1999 and have opened numerous stores in Wales and across the West Midlands, we are proud to have chosen Rochdale as the location for our first car superstore in the North West”

The Trade Centre UK’s entry into Rochdale creates 130 jobs for the area along with significant investment in supply chain and support services.

"I have lived in or around Rochdale all of my life so it was no surprise to me that value-driven car shoppers inundated us on our opening day. Modern day consumers want immediacy of delivery and a no-fuss retail process, we fulfil this with our drive away in 1 hour concept which is backed by a panel of 12 finance lenders, enabling our customers to have their new car on their driveway on the very same day they chose it” he added “most customers choose to use their old car as a deposit or alternatively put down £99 and drive away with payments as low as £20 per week, every car undergoes a 99 point pre-delivery inspection and post-sale safety check”

The Trade Centre UK launched their brand on TV with three back to back spots on ITV on the day of opening, positioned between Emmerdale, Coronation Street and I’m a Celebrity …Get me Out of Here! in addition to this, the business is playing out across most radio stations and has a massive digital and outdoor presence.

Andy explained “By now, all of Rochdale and most of the North West will know we are open, our marketing budget, including launch, sees us spending £2.3m from opening until the end of January. The beginning of December is seasonally quiet for car retail and we expect to sell just a few hundred cars during our soft-launch period up to Boxing Day and then marketing really kicks in, the brand will be a household name in the region in no time”

‘We welcome Mark and his team to the Borough, such a long established business is sure to be a huge success, not only serving the people of Rochdale but also car buyers from across the North West. We met many of the staff, all recruited locally, during our tour and they all seemed engaged and excited to be part of the team, the showroom looks wonderful”

“We are really pleased to welcome Trade Centre UK to Rochdale for what it the company’s first site in the North West. I am sure that they will be a valued member of the local community and wish the company every success with this new site.”

In recent years, The Trade Centre Group has become renowned for its contribution to charities and community initiatives. The company has helped raise over £350,000 for NSPCC and offers kit sponsorship opportunities for local grassroots sports teams.

The Trade Centre Group was founded by Mark Bailey in 1999 and remains 100% owned by the Bailey family. The company has grown considerably over the last few years and sits at number 90 in the Sunday Times Top Track 250.